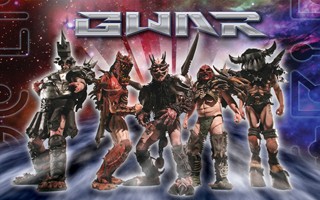 GWAR To Be Inducted Into The Harvard Lampoon

The two year 25th Anniversary Slay-A-Bration is showing no signs of slowing down, as your lords and masters GWAR are set to receive yet another accolade glossing their infinite greatness, this time in the form of a stunning endorsement from the academic community. GWAR is finally being recognized by The Ivy League colleges, and is now set to receive the prestigious honor of being one of a select few to be inducted into The Harvard Lampoon.

The Harvard Lampoon is America’s oldest institution of humor, operating from the Harvard campus since 1876, and boasting an elite cadre of members that include the likes of Conan O’Brian and BJ Novak, as well as many of America’s top comedy writers and performers. The ceremony will take place this Saturday October 16th at the world-famous Harvard Lampoon Castle in Cambridge, Massachusetts.

The Lampoon put out an official statement on GWAR’s induction: “In honor of their prodigious achievements of slaughter, brutality, conquer, mayhem, and madness, The Harvard Lampoon is delighted to present GWAR with the award of “Most Terrible, Vile, Disgusting, Disturbed, yet Revoltingly Awesome Band Ever.” On October 16th the band will travel to Cambridge, Massachusetts to visit the Castle and celebrate in a private induction ceremony, banquet, and live human sacrifice in their honor.”

When reached for a comment on this prestigious honor Oderus briefly laid down his crack pipe and muttered: “Me and the guys are as pleased as pig-shit to accept this near-meaningless accolade from a bunch of booze-sodden degenerates. To walk in the shoes that tread in the footsteps that tied the shoelaces that were Elijah Wood’s big ass hairy hobbit feet fills me with a feeling not unlike lust but nothing like nausea. To mumble the words that were the drool that became the Jell-o that fell out of Bill Cosby’s butt is the third most important thing to happen to me today. And finally, to lap at the glistening shores that is the toilet that Sarah Silverman left a dookie in is akin to having sex with Jesus’s wife. We are honored, pleased, and gassy as hell as we accept this mantle-crushing award and the considerable attached cash prize…there is a cash prize, right?”