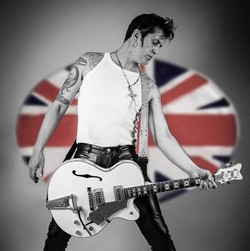 Gypsy Lee Pistolero Aiming For October Release Of ‘The Good, The Mad And The Beautiful’

Gypsy Lee Pistolero has unveiled his new ‘Elvis’ retro rocker look, to go with his upcoming new album ‘The Good, The Mad and The Beautiful’. The former Gypsy Pistoleros founder, frontman and songwriter has promised a punkier, retro rock ‘n’ roll, latin sound this time around — in a Ritchie Valens meets Hanoi Rocks drunken revved up party.

Be sure to check out Gypsy Lee Pistolero’s Pledge Music page at www.pledgemusic.com/artists/gypsyleepistolero to get your hands on all sorts of exclusive swag — including pledger only news and updates, signed CDs, signed vinyls, merchandise, exclusive up close and personal gigs, and much more.

The 14 track Pledge album will be remixed and mastered, with the commercial release of ‘The Good, The Mad And The Beautiful’ on Heavy Metal Records tentatively set for October. But until then you can hear a FREE taster of things to come via Lee’s Reverb Nation page at www.reverbnation.com/gypsyleepistolero — where a showcase of killer tracks can be heard, including a cover of Cher’s “Gypsies, Tramps & Thieves”.

Fans can keep up to date with Gypsy Lee’s latest album developments, including videos from the studio, via his Official Facebook band page at www.facebook.com/gypsy.lee.pistolero.