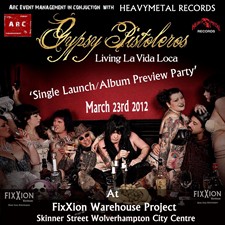 Gypsy Pistoleros have announced the details of a lead single and worldwide release dates for their highly anticipated debut album on Heavy Metal Records.

The album, ‘Forever Wild, Beautiful And Damned: Greatest Hits Vol. 1’, will rock its way into the UK and mainland Europe on the April 9th (via Plastichead) before landing in the US and Canada in May 2012 (Via MVD).

As a taster of what is to come, March 26th marks the worldwide single release of the Pistoleros’ Flamenco-infused, glammed out rendition of Ricky Martin’s chart hit “Livin’ La Vida Loca”.

With its English translation being ‘Living the Crazy Life’, this track is an uncannily appropriate way ofcapturing the Pistoleros’ wild persona — as flaunted across the stages of Rocklahoma fiveyears running. The group has also swaggered its way into numerous sweatbox club shows, notchingup a series of gigs alongside artists such as Buckcherry, Papa Roach, L.A. Guns and ZZ Top.

The Pistoleros will host a gig on the 23rd of March at Club Hell (Fixxion Warehouse, SkinnerStreet, Wolverhampton) celebrating their debut Heavy Metal Records release. With very special guests, strippers,burlesque performers, midgets… this gig is not to be missed.

For more details on the greatest hits collection (mixed and produced by the legendary Joe Gibb), and to viewthe “Lvin’ La Vida Loca” music video, see HeavyMetalRecords.com and GypsyPistoleros.com.

From their 2006 beginnings as opening act for American rockers Adler’s Appetite in Spain, Gypsy Pistoleros quickly attracted the attention of the Spanish rock media. Capturing the imagination ofSpanish audiences with a glorious collision of crashing big punk rock riffs on a backdrop of Spanishflamenco breaks, the band has earned themselves a critically acclaimed worldwide reputation fortheir attitude-laced fusion of Latin rock.