Gypsy Pistoleros featuring frontman Lee Pistolero have bg plans for 2021 including the releasee of their new studio album The Mescalto Vampires in July 2021. 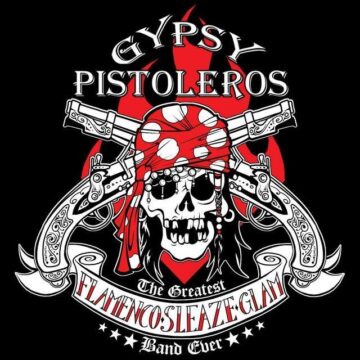 This special limited edition 7″ vinyl release is on Red with gold splatter and digital (Download) and Supporting video Brand New single ‘Lost In A Town Called Nowhere’ is out Feb 26th (Special limited Edition 7″ Red & Gold Splatter vinyl edition will be available (Only 500 copies) So get em quick!

Sleaze Roxx stated the following in its review of Gypsy Pistoleros‘ 2011 album Duende – Last of The Pistoleros: “When Gypsy Pistoleros burst upon the scene in 2007 with Wild, Beautiful, Damned they brought a uniqueness to the world of hard rock that is rarely found — by mixing sleaze with flamenco sounds the band was both impressive and fresh. Unfortunately they never seemed able to build upon that initial hype and struggled with record companies, revolving band members and any other problem a group can face. Rising from the ashes is frontman Lee Pistolero, who is forging ahead on his own as ‘the last of the Pistoleros’.”