U.K./Spanish rockers Gypsy Pistoleros are back after what appears to have been a few years of hiatus. 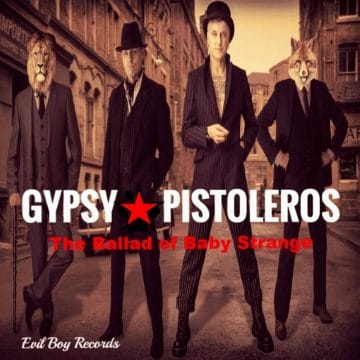 Gypsy Pistoleros‘ Wild, Beautiful, Damned! album reached #3 on Sleaze Roxx’s Top Ten Albums of 2007. Sleaze Roxx stated the following in that regard: “If you’ve been a consistent reader of this website you will know that originality doesn’t mean much to me – I’ll always choose rehashed greatness over half-assed newness. Gypsy Pistoleros is an exception to that rule. I wasn’t sure what to think when I first spun this mixture of sleaze and flamenco, but I instantly knew that the band was onto something amazing. You know an album is great when you hang off every word despite not understanding what half the lyrics mean! Wild, Beautiful, Damned was so good that it is already getting re-issued under a new title with extra tracks, look for that release in late January.”

“Gypsy Pistoleros are back! The Original founding members & songwriters (Gypsy Lee Pistolero and Ian Walker) are recording a new album ‘The Magical, Mystical Medicine Show’ out September 2017 on Vinyl & c.d.

The first teaser single ‘The Ballad of Baby Strange’ is out December 9th online everywhere via Evil Boy Records. Pre-release available to order here at iTunes.

Yet, the lure of the crazed psycho circus has won! GLP will remain actor, singer, icon, wanker! Gypsy Pistoleros are back!!!!!

The mongrel offspring of fiery flamenco passion and gritty gutter glam, the Gypsy Pistoleros’ were born roamin’ somewhere between Barcelona and Birmingham, brought into the world to a soundtrack stack-heeled anthems of sleazy ’70s America. 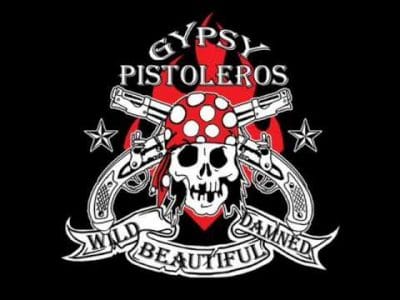 Standing alone in musical ancestry and sum sound, they’re one of those most rare acts who honestly can claim the tag: ‘unique.’ From their 2006 beginnings as opening act for American Rockers Adler’s Appetite in Spain the Pistoleros quickly attracted the attention of the Spanish Rock media. Capturing the imagination of Spanish audiences with a glorious collision of crashing big punk rock riffs on a backdrop of Spanish flamenco breaks, the band has earned themselves a critically acclaimed worldwide reputation for their attitude-laced fusion of Latin Rock.

The insane inspiration came from front-man Lee Pistolero, who after living in Zaragoza, Spain struck upon fusing his roots in the British glam punk circuit with Gypsy Rumba and first experimented with it by supporting The Ramones in 1993 on their Spanish Tour. The Gypsy Pistoleros always had a reputation for danger and made history by being the only band to have played at five Rocklahoma festivals, in Oklahoma, USA, they have appeared alongside Motorhead, Motley Crue, Guns and Roses, Twisted Sister, Poison, Whitesnake, Black Label Society, Papa Roach, Staind and almost every major 80’s Rock group.

They have returned with this new album to their original sound which is flamenco/rumba in a head on collision with punk/rock riffs, pounding bass and thrashing drums. The songs span madly in the best rock ‘n’ roll tradition! With big hooks, attitude, and sleaze. Yet those rumba breaks got into your head and refused to leave – this hybrid rocks.

Gypsy Pistoleros‘ “The Dirty Side Of Midnight” video: