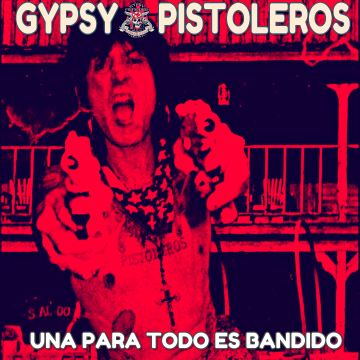 ‘Una Para Todo Es Bandido!’ Remixed and remastered, the classic WET (Rubi) Grindhouse shoot em up Playstation / XBOX fans favourite tune from the video game encompasses what The Pistoleros are all about. One minute you could be sitting in Cabo sipping the most exquisite tequila the next you are downing pints in an underground club in London. Unique, engaging and dangerous it pounces between upbeat Mariachi to street born and bred sleaze drenched fiery rock.

They are already recording a brand  new album ‘The Mescalito Vampires!’  in Black Tree Recording Studios, with guitarist Mark Westwood engineering and producing (The Beat, Dogs D’Amour, Hazel O’Connor, Dreadzone, etc) which will be released at Christmas time.

An alternative mix will be done by Joe Gibb (David Bowie, The Cure, The Kinks, Jane’s Addiction, Catatonia, etc.).”