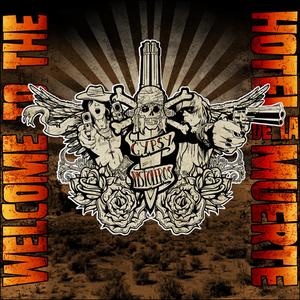 GYPSY PISTOLEROS are signing to LIME RECORDS (www.limerecords.com). The new album ‘Welcome to the Hotel de la Muerte’ has been recorded!

The eccentric legend that is Joe Gibb (Janes Addiction, Catatonia, Funeral for a Friend, The Kinks, The Cure, etc) engineered, mixed, AND produced it all himself throughout June in Mighty Atom Studios in Swansea, Wales.

Three rough mixes of new tracks featuring on the new album are up on www.myspace.com/gypsypistoleros, including the epic 8 minute 29 second ballad ‘Sangre de la Rosas’ featuring members of the Welsh National Orchestra (arranged by Joe Gibb). Plus ‘Welcome to the Hotel de la Muerte’ and the reworking of the Spanish Flamenco classic ‘Son Iluiones’.

Full mixing of the album will be completed in the next few weeks. A wWorldwide release on LIME Records is set for October.

A mini album will be released solely for the U.S Rocklahoma Rock Festival to coincide with GYPSY PISTOLEROS main stage appearance with THIN LIZZY on Saturday 11th July, plus the new merch range!!!

Major support tours in the U.K and Europe with L.A Guns in September and October TBA, plus a mini U.S Tour November!