Gypsy Pistoleros to release 18 track anthology record, working on new album and to tour next year

The Gypsy Pistoleros featuring frontman Gypsy Lee Pistolero are back and set to release an 18 song anthology record and a brand new studio album The Mescalito Vampires! as well as tour next year. 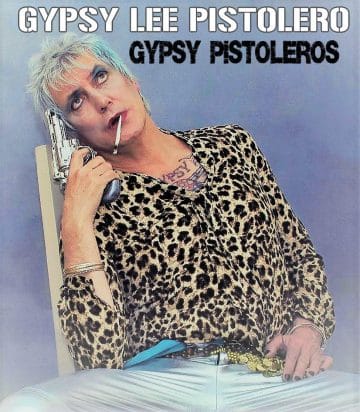 The band will announce live Tour dates next year!

Gypsy Lee Pistolero aka Lee Mark Jones has pursued an acting career during the last five years (obtaining a Masters degree at University in Touring Theatre) starring in various independent hit horror movies. His Edinburgh Festival Fringe 2019 hit one man show ‘A Rock n Roll Suicide!‘, his autobigraphical story that included singing live, chronicalling his life as a nearly never was Rockstar. Ironically led to renewed interest in his musical career and the signing to Golden Robot.

GLP stated, ” Im thrilled to be back in the Rock n Roll Circus! Even though it may destroy my never nearly was Rockstar show? There is unfinished business with Gypsy Pistoleros, it deserves to be more than a cult band, and with Golden Robot / Riot Records, it now has a chance to reach a Global audience and become the success the music deserves! Im excited and cannot wait for everyone to hear the new stuff, Flamenco Glam Sleaze Rumba Rock n Roll is back!!!”

Track List for The Mescalito Vampires:
01. A Town Called Nowhere
02. Viva Zapata
03. Only The Good Die Young
04. Another Friday Night
05. Just Give Me Everything
06. The Forsaken
07. Graveyard of Tears
08. El Mariachi
09. They Call Me Django
10. Johnny Dangerous
11. The Stranger

Gypsy Pistoleros are still something truly unique and interesting in today’s predictable musical landscape. A sound and style that mixes sleazy glam punk rock with flamenco influences with a shout out to Mexican folklore and Spanish tendencies. 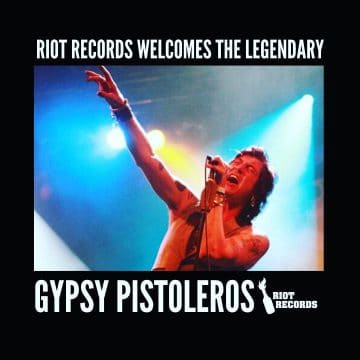 Exactly the music we like to see on Riot Records expect the unexpected.

Gypsy Pistoleros may be best described as being the ideal house band for the fictitious Titty Twister bar of Rodriguez’s From Dusk Till Dawn. Between the nods to Morricone’s tense, tumbleweed atmospheres and the Gypsy Kings’ manic Mediterranean energy, a New York Dolls raw glam spark and a surplus of prime Guns N’ Roses attitude, the Pistoleros‘ sonic style has roots has a widespread as the global fanbase it’s been gathering since they began playing in 2005.

The sound is flamenco in a head on collision with punk/rock riffs, pounding bass and thrashing drums. The songs span madly in the best rock ‘n’ roll tradition with big hooks, attitude, and sleaze. Yet those flamenco breaks got into your head and refused to leave – this hybrid rocks.

This mongrel offspring of fiery flamenco passion and gritty gutter glam, the Gypsy Pistoleros’ were born roamin’ somewhere between Barcelona and Birmingham, brought into the world to a soundtrack stack-heeled anthems of sleazy ‘70s America. Standing alone in musical ancestry and sum sound, they were one one of those most rare acts who can honestly claim the tag ‘unique’.

The insane inspiration came from frontman and songwriter Gypsy Lee Pistolero who began wielding this unique sound whilst living in Zaragoza (Spain) whilst supporting The Ramones and Mötorhead in 1993 & 1996.

Gypsy Pistoleros‘ “The Dirty Side of Midnight” video: