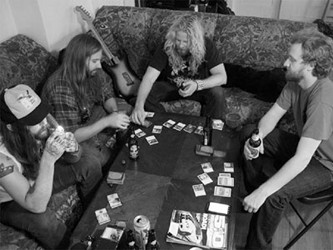 Metal Blade Records is pleased to announce the signing of Gypsyhawk, a band who hails from Pasadena, California and is part of the Modern Wave of Classic Heavy Metal. Combining the sound of Thin Lizzy, Hawkwind and Deep Purple with contemporaries like The Hellacopters, somehow just a few average dudes — with a penchant for riffs — have set out to return music to the people that really appreciate it. Gypsyhawk is a band’s band, a fan’s band, and a flat-out rock and roll band when music needs it most.

The band comments: “Metal Blade Records has been making the hits since before most of us were born. They inherently had a latent inspiration on all of us, cranking out some of the most inspirational sounds to come out after the ’70s. To be part of this family doesn’t leave much to be desired. In the mean time we’ll be doing our best to live up to the Metal Blade legacy and couldn’t be more eager for everything we’ve been working for during the last two and half years.”

“Gypsyhawk captures the epic 70’s hard rock riffs of such great 70’s bands as Thin Lizzy and Judas Priest with their own updated twist. We are excited to be working with such a gifted band and look forward to their first album on Metal Blade. ” comments Michael Faley of Metal Blade Records.

Not wasting any time, the band hits the road starting tomorrow, Wednesday September 7, on a headline run that kicks off in Ventura, CA at Zoey’s Cafe and wraps up on at The Launch Pad in Albuquerque, NM on October 13.

“This is our fifth tour and will definitely be the best one yet. It didn’t take long for the last one to solidify us as an extremely solid and explosive live band. Now we have several new cities to break in and five brand new songs for all the familiar cities to have something different to gnaw on. And to top it all off the first week includes our good buds Huntress so that’ll be a solid enough party that if it were a scene in a film you would have to use Boston’s ‘Smokin’ and Bob Seger System’s ‘Ramblin’ Gamblin’ Man’ in the background.”

About the band:
In a time when music is shoveled down listeners’ throats, Gypsyhawk backs up the walk with rock, and maybe a little swagger — but that’s all for good showmanship as much as the sake of the song. The Pasadena, California foursome has been honing its sound, sharpening its riffs and showing the promise it holds in the palm of their hands since the band’s mid-2009 inception through perseverance, practice, and an ever-increasing number of shows both at home in Southern California and across the U.S.

Fronted in true Phil Lynott style by singer/bassist Eric Harris, having already put in his time with Ohio blackened thrashers Skeletonwitch before moving to California, Gypsyhawk’s foursome was initially rounded out with guitarists Andrew Packer and Scotty Conant, and drummer Joe Fabio. The band’s promising self-recorded January 2010 demo caught Bay Area-based Creator-Destructor’s attention, which in turn led to the July 2010 release of Patience and Perseverance a full, twelve-track debut mixing melodies, musicianship, monstrous riffs, and the all important guitar solo.

Recorded in April 2010 in Oakland with producer Zack Ohren (All Shall Perish, Light This City), Gypsyhawk enlisted artist Dan Lerner to create a fitting visual representation of the band’s manifest, which Harris and company think Lerner more than accomplished, mixing eerie vibes with hippy mentality, suiting for the band’s brand of harmonies and hard rock. With Patience and Perseverance and subsequent early praise for such a new band, GYPSYHAWK hopes to keep spreading the love for melody and riffs — and the solos — and everything that made the ’70s era of super rock so fun.

Since the release of Patience and Perseverance, and several tours in support of the record, Gypsyhawk has finally capitalized on the hard work the band has burdened their shoulders with in its brief, but bubbly and budding, existence. Now supplementing founders Packer and Harris are guitarist Erick Kluiber and drummer Ian Brown, injecting some fresh blood into the four-piece, long-haired outfit.

Up next: another nation-wide tour in support of Patience — all booked themselves in true D.I.Y. fashion, whereupon Gypsyhawk is unveiling a handful of new songs which will surface on a second full-length, so fans will get a preview before the tunes are laid down in the studio. Turn down the lights and turn up the tunes indeed!