In a rather shock announcement, Swedish rockers H.E.A.T have announced that their lead vocalist Erik Grönwall, who handled the lead vocals on their last four studio albums, — Address The Nation (2012), Tearing Down The Walls (2014), Into The Great Unknown (2017) and H.E.A.T II (2020) — has been replaced by original singer Kenny Leckremo who appeared on the band’s first two studio albums, H.E.A.T (2008) and Freedom Rock (2010). 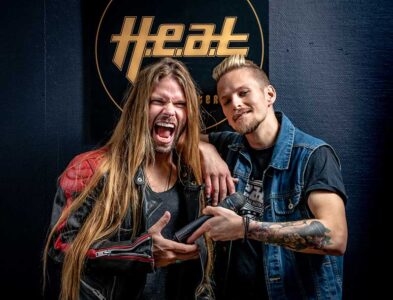 “The Lord giveth and the Lord taketh away.”

Swedish rock band H.E.A.T have today announced that lead singer Erik Grönwall will be leaving the band, and that his replacement will be original H.E.A.T vocalist Kenny Leckremo.

The news comes after the success of the band’s critically acclaimed sixth studio album H.E.A.T II which featured the singles – ”Dangerous Ground”, ”Rock Your Body”, ”Rise”, ”Come Clean” and ”One By One”.

The original founding members of H.E.A.T issued the following statement about Erik leaving the group to pursue other interests.

“First of all, we want to thank Erik for all the crazy fun and epic travels around the world the past 10 years. Together we made H.E.A.T what it is today. Secondly, we want to welcome back founding member and original vocalist Kenny Leckremo to the band. We’re looking forward to write the next chapter of H.E.A.T story together.”

”It’s like a shot at redemption,” adds Leckremo. “I’m thrilled to be back, and to be a part of what H.E.A.T is today.  No longer just a shadow of the past, but a force into the future. The H.E.A.T legacy continues.”

Says Grönwall about his departure – “H.E.A.T has really been a place for me to grow as an individual, singer and frontman. The guys recruited this young Swedish Idol guy and believed more in me and my potential than I did myself. I am forever grateful for that. Gentlemen it’s been a pleasure touring the world with you. I’ve learned a lot from you and you’ve made me stronger.  I look forward to build more memories with you, just not collectively as H.E.A.T.”

Grönwall expanded on his reasons for leaving H.E.A.T on his Facebook page earlier today (with slight edits): 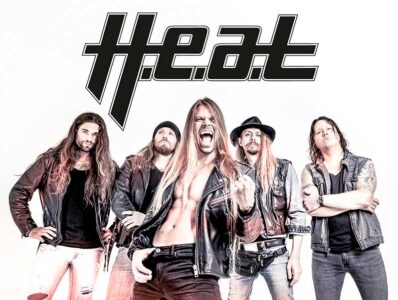 Life is too short to be static. It’s extremely important for me to keep growing everyday and never get stuck in my comfort zone. I’ve had the honor to tour around the world together with H.E.A.T, my best friends, for 10 years but now I have decided to move on and try something new.

H.E.A.T has really been a place for me to grow as an individual, singer and frontman. The guys recruited this young Swedish Idol guy and believed more in me and my potential than I did myself. I am forever grateful for that. I really wish more people could experience being in a band, everything from traveling together, the connection between the members, the laughs, the fighting over a set list, the good days, the bad days, the unlimited amount of alcohol while also trying to coordinate and organize everything as a business, the living on a tour bus together with 0.5 m2 space available… It’s worth it! ⠀

Gentlemen it’s been a pleasure touring the world with you. I’ve learned a lot from you and you’ve made me stronger. When I’m on my death bed I will still laugh at some of the crazy shit we’ve done. I look forward to build more memories with you, just not collectively as H.E.A.T. I want to clarify that this decision is my decision alone and there are no hard feelings anywhere. We are all grown ups and respect each other’s decisions in life.⠀

Thank you from the bottom of my heart to all of you who have supported me and H.E.A.T throughout the years. I will keep rocking in a different format and have a few things to present in the near future. If you want to follow me on that journey as well just hop on! I hereby hand over the microphone to my fellow rocker and original H.E.A.T singer Kenny Leckremo.

I will focus on building my entertainment company in Africa Hitchat where we create entertainment and give talents in these markets a platform and the opportunity to be discovered. I will also focus on assisting my clients in my management company Hagenburg AB.⠀

“Life should not be a journey to the grave with the intention of arriving safely in a pretty and well preserved body, but rather to skid in broadside in a cloud of smoke, thoroughly used up, totally worn out, and loudly proclaiming ‘Wow! What a ride!’ –Hunter S Thompson“