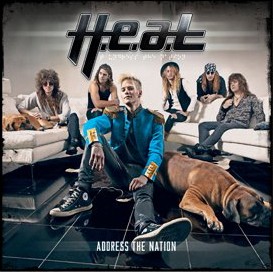 H.E.A.T are gearing up to release the follow-up to their 2010 album ‘Freedom Rock’ called ‘Address The Nation’, which will drop on March 28th through Gain/Sony Music.

‘Address The Nation’ is H.E.A.T’s third full-length album and first with new vocalist Eric Gronwall. The first single from the new album is the epic “Living On The Run” which is currently available through iTunes and Spotify. Produced by Grammy Award winner Tobias Lindell (Europe, Mustache, etc.), ‘Address the Nation’ will certainly not leave a H.E.A.T fan disappointed.

‘Address The Nation’ is currently available for preorder at www.ginza.se and cdon.se.

H.E.A.T broke through in 2009 with the radio hit “1000 Miles” and has since toured extensively around the world — the band can be found on their website at www.heatsweden.com.