One of the biggest complaints at rock festivals is that bands do not get enough time on stage and can only play a very limited set.  Rock The Roses‘ Hair In The Fair Rock Festival that will take place at the Niagara Regional Exhibition in Welland, Ontario, 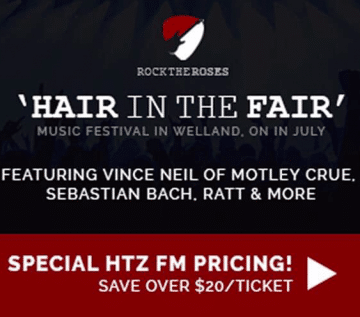 Canada from July 11 to 13, 2019 is seemingly trying to address this issue in its inaugural event given that 17 out of the 26 bands scheduled to play will have at least a one-hour set (see below).

The Hair In The Fair Rock Festival also has placed some emphasis on Canadian rock bands given that half of its roster (13 acts) emanates from Canada with the most prominent Canadian bands being veteran rockers Helix, the Killer Dwarfs, Diemonds, Sven Gali and Moxy. The Trailer Park Boys are also part of the festivities and part of the Canadian content for the festival. If you count former Skid Row lead vocalist Sebastian Bach as a Canadian, the number of Canadian acts at the inaugural Hair In The Fair Rock Festival will be 14 out of 26.

The festival’s headliners are none other than Ratt on Day One, Sebastian Bach on Day Two and Vince Neil of Mötley Crüe on Day Three.

The following message was posted on Rock The Roses‘ Facebook page earlier today:

“Hair In The Fair July 11-13, 2019- set times are listed for each day at www.rocktheroses.ca. Tickets-VIP-Camping- Hotel Packages still available! This is a worldwide experience! They are coming from Russia, Norway, Mexico and all over the USA and Canada! It’s time to Rock The Roses! Like. Share.”