Hair metal legends Nova Rex are back with a new video for their song “She’s A Bitch.” The song was released back in May 2015 via Quantum Records. Nova Rex were the subject of a “hair metal rockumentary” back in 2011. 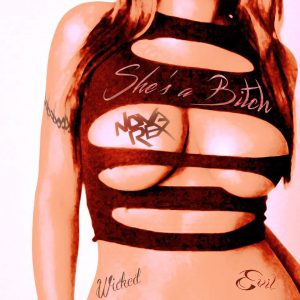 “Nova Rex takes movie star glamour and hair metal swagger into millions of homes with the real-life rockumentary Nova Rex: Ain’t Easy Being Cheesy on Netflix and the Documentary Channel. Nova Rex keeps the hard rock party alive since 1985 with a little help from Budweiser King of Beers, the Rock & Roll Hall of Fame Museum and Archives and the Smithsonian National Museum of American History. “I Just Wanna Rock,” “Turn It Up Loud,” “Think of Me” and a hit list of classic rock and roll continues to inspire good times and fun adventures for the legion who know Nova Rex rocks!” 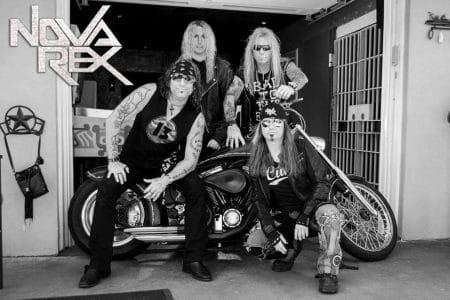 They personally take you behind the scenes for an intimate look at a band whose time had come and gone. In a satirical light-hearted way, these guys just lay it all out there in a manner that will have you laughing and reminiscing about the good old days. If you were in a rock band or close to one (groupie), then this movie will have you smelling sex, drugs and rock & roll all over again.”

Sleaze Roxx stated the following in its review of Nova Rex: Ain’t Easy Being Cheesy: “The hair-metal rockumentary Ain’t Easy Being Cheesy is a look back at the history of Nova Rex. You’re probably thinking to yourself… Nova Who?? Well, Nova Rex were an ’80s hard rock band that formed in Canada, drifted to Florida and L.A., before finally settling down in Indiana and proceeded to watch their world crumble when grunge led to the massive mid-’90s hair-metal extinction.

A look back on the career of a regional band such as Nova Rex probably isn’t going to appeal to many people — but if you approach this as an introspective on the infamous hard rock era it becomes an enjoyable film. When I say Nova Rex packed clubs during their heyday, younger readers may think ‘yeah, right’, but you have to remember that this was a different time. In the days before internet, YouTube and DVDs, people actually had to venture outside to get their hard rock fill — meaning that every city/region had their own local heroes that were superstars inside their territory. Nova Rex says it best on Ain’t Easy Being Cheesy, “the difference between us and a band like Def Leppard was just numbers, instead of a 1000 chicks after a gig we only had 20.” And there lies the charm of this retrospective DVD, the fact that in the late ’80s even relatively unknown bands could (and did) live the rock ‘n’ roll dream.”

NOVA REX: AIN’T EASY BEING CHEESY is the hilarious “hair-metal rockumentary” directed and edited by Dean Robinson (“Butch Black: The M.E.A.N. Man!”). The 201…