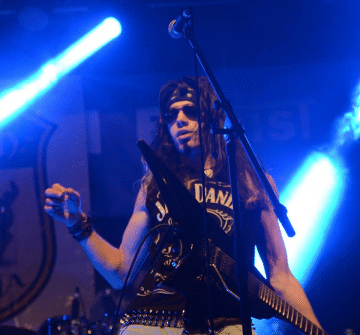 HairX‘s “Biography” on its Facebook page states (with slight edits):

“The group was formed in 2013 by the singer Miha Polanc and lead guitarist David Gorkič with desire to create and play old hard rock music.

They were joined by Gregor Klaut on bass, Leon Simčič on guitar and drummer Matija Podbersič.

Soon followed the first songs and concerts in Nova Gorica.

In 2015, Patrik Drole replaced Leon Simčič on guitar, which brought a new freshness to the band. The response from the audience was very positive and the group quickly started to gain kilometres from the stage performances throughout Slovenia.

At the end of 2016, Gregor‘s bass went to hands of Tilen Jarc, and the sticks were passed in the hands of Kristjan Čuk.

We are currently in recording studio, in spring 2017, will be release our first album called »Animals«.”

Sleaze Roxx stated the following in its review of Animals: “HairX offer ’80s style hard rock with a twist — the twist being a presumably Eastern European singer with some slightly Slovenian accented English. If you enjoy Miha “Polo” Polanc‘s singing, odds are that you’ll really like HairX‘s entire album Animals given that the music and melodies are quite good. I for one do like Polanc‘s singing and have always enjoyed some slightly accented English singing so do enjoy the Animals album. Polanc‘s voice is so distinctive and dominating at times that I think it will be a love or hate thing with the album for most.”