Slovenian glam metal rockers HairX have released a short video teaser for their upcoming new single that will be released in the next few days.

The following message was posted in part on HairX‘s Facebook page earlier today: 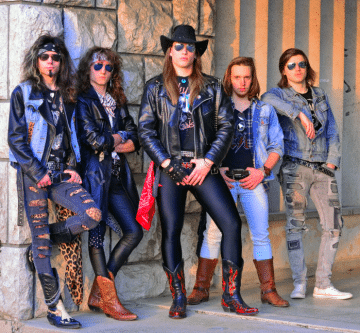 In the following days, we will introduce you to something new! But until then, lets play a game. All you need to do is to run around and spread the news that HairX are up and running!

Sleaze Roxx stated the following in its review of HairX‘s Animals album: “Another new band, another solid album… I wish that all the hard rock and heavy metal fans of the ’80s that pine to hear more would give these new bands like HairX a chance because there’s still lots of great music being made to hear but you admittedly have to dig a little deeper to find it now that it’s not on mainstream radio like back in the ’80s glory days.

HairX offer ’80s style hard rock with a twist — the twist being a presumably Eastern European singer with some slightly Slovenian accented English. If you enjoy Miha “Polo” Polanc‘s singing, odds are that you’ll really like HairX‘s entire album Animals given that the music and melodies are quite good. I for one do like Polanc‘s singing and have always enjoyed some slightly accented English singing so do enjoy the Animals album. Polanc‘s voice is so distinctive and dominating at times that I think it will be a love or hate thing with the album for most.”

HairX‘s video teaser for next single: