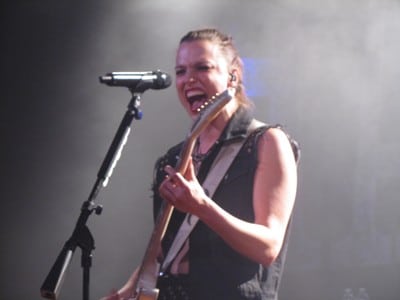 Halestorm release new song “Do Not Disturb” for streaming

Pennsylvania rockers Halestorm have released a new song titled “Do Not Disturb” from their forthcoming new studio album Vicious, which will be released via Atlantic Records on July 27, 2018. The group previously released a video for the song “Uncomfortable” as well as the song “Black Vultures” for streaming.

Sleaze Roxx stated the following about Halestorm‘s last studio album Into The Wild Life, which was released in early 2015: “Modern sounding does not equate to better music. That is my assessment after having repeatedly listened to Halestorm‘s new record Into The Wild Life, which follows up their absolutely stellar and brilliant The Strange Case Of…(click here to read that review). Truth be told, I was going to heavily criticize Into The Wild Life after the first spin, but after repeated listens I have warmed up to it somewhat. Had Halestorm not previously released one of my favorite records of 2012 with The Strange Case Of…, and if frontwoman Lzzy Hale did not have such a great voice, I would have likely dismissed the group’s new effort after that first listen but instead I ended up playing it quite a bit despite initially pretty much hating it. The moral of this story is that if you listen to an album enough times, you will likely find some good stuff in there somewhere.

Into The Wild Life starts with everything that is wrong with a good band trying to incorporate too many modern sounds into a song. “Scream” is still listenable despite the displeasing guitar sounds that get on my nerves and which make me feel like I am hearing construction work at an industrial park — it simply could have been so much better. “Mayhem” is another example of poor sounding industrial-like guitars and distorted (or “voice box”) type vocals at times, which ruin the song.”

Halestorm‘s “Do Not Disturb” song:

Halestorm – Do Not Disturb [Official Audio]