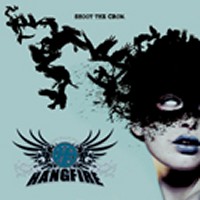 Hangfire Streaming “For Crying Out Loud” On Sleaze Roxx

Southern Welsh rockers Hangfire have teamed up with Sleaze Roxx to bring you the song “For Crying Out Loud”. The single, featuring former Tigertailz drummer Matt Blakout, appears on the band’s brand new album ‘Shoot The Crow’ — available for purchase at www.hangfire-rocks.co.uk.

Hangfire’s ‘far reaching’ influences spans the classic rock heyday of late July to the middle of August 1987! The roller-coaster ride of their first EP ‘Confessions’ was brought to a premature halt by the sad loss of theirbrother and drummer Aaron.

There followed a period of intense writting and ‘soul searching’ during which time long-time friends Matt Blakout (drums) and Bobby Goo (bass) joined frontman Max Rhead and guitarist Lizzy Evans to provide the incredible rhythm section that the band was waiting for.

2012 saw the explosive release of their new album ‘Shoot The Crow’. The band’s performances on this album encapsulate an awesome fusion of light and shade — from the raw aggression of “Bodies” and “Shoot The Crow”, the moremelodic hook laden “For Crying Out Loud” and “Faith In Me” to the blues inspired “Slip Away” and the sombre, heartfelt tribute to their fallen brother “Dead Man Walking”.