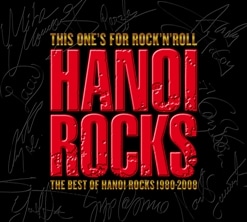 The definitive Hanoi Rocks compilation, This One’s For Rock’n’Roll, is in stores now in Scandinavia.

Following Hanoi Rocks’ recent announcement that they will break up by the end of this year, they are announcing the release of a brand new 2-CD retrospective compilation This One’s For Rock’n’Roll on November 26th 2008. This superb package includes 33 songs, encompassing both distinctive parts of their career, the 80’s and the new millennium. The lavishly packaged set includes many previously unreleased photos and written testimonials from illustrious peers such as Alice Cooper, Ginger (Wildhearts), Dregen (Backyard Babies) and Jussi 69 (The 69 Eyes).

CD 2 brings the legend up-to-date with music from the reborn band from 2001 onwards.