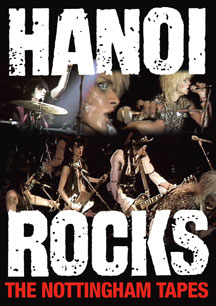 HANOI ROCKS ‘ THE NOTTINGHAM TAPES’ COMES TO DVD FOR THE FIRST TIME:

Hanoi Rocks’ first DVD! A rockin’ concert from 1984 at the Palais in Nottingham, England.

This performance, filmed on April 23rd 1984 at the Palais in Nottingham, England, has since established itself in the annals of Rock n Roll legend. The Nottingham Tapes was born.

Here, at last, for the first time on DVD, is that very footage in all its sleazy, gritty glory. As a piece of rock history it is priceless, as a piece of pure rock n roll pleasure it is peerless.

Formed in Helsinki in 1979, Hanoi Rocks drew their influences from American proto punk bands such as The Stooges, The Sonics and most obviously The New York Dolls. But unlike their punk peers they delved into the music that inspired their heroes – Chuck Berry, Little Richard and other Rock n Roll icons. Add a healthy slice of glam rock to the mix and you had a band that would, in turn become a massive influence on generations of rock bands that followed, most significantly Guns and Roses and Manic Street Preachers.

For the best part of five years Hanoi Rocks stormed the world, relocating first to Stockholm then London, and although they never achieved the commercial success they deserved they amassed a huge cult following that still thrives today. So much so that Mike Monroe and Andy McCoy reformed as Hanoi rocks in 2002 and are still touring.

Back To Mystery City
Up Around The Bend
I Cant Get It, Motorvatin
Mental Beat
Boulevard Of Broken Dreams
Dont Never Leave Me
Tragedy
Malibu Beach Nightmare
Underwater World
Lost In The City
I Feel Allright
Taxi Driver
Blitzkrieg Bop