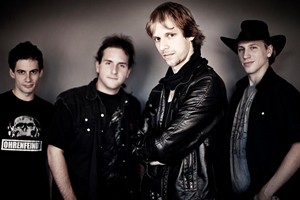 Hard Riot Set To Release ‘Living On A Fastlane’ In April

German hard rockers Hard Riot are the latest addition to Pitch Black Records’ roster and will be releasing the band’s debut album, ‘Living On A Fast Lane’, on April 10th.

Hard Riot were formed in 2006 in the city of Heilbronn, Germany and the band consists of four young friends who share the same passion — hard rockin’ music.

Their powerful stage presence and performance has landed them with numerous live shows over the past few years and many devoted fans. In 2009 Hard Riot released a self-financed 5-track EP (‘The Hidden Truth’) and in 2011 they entered Maranis Studios in Backnang, Germany, relying on the excellent skills of producer Vagelis Maranis who oversaw the entire recording and production of their debut album.

Hard Riot is Michael Gildner on vocals, Andreas Rockrohr on guitars, Mario Kleindienst on bass and Carmine Jaucci on drums. Their influences include AC/DC, Metallica and the Scorpions among others but their influences don’t stop here. These and many more are clearly evident throughout their music. The band’s main style is hard rock but one can also find a good dose of heavy/speed metal in their music. One thing is certain when listening to Hard Riot perform, they are enjoying every moment of their music and that’s something that is undisputedly conveyed to the listener.

Hard Riot are currently offering a free download of the single “Hellfire Rock”. More information on the band can be found at www.hard-riot.com, www.facebook.com/hardriot and www.pitchblackrecords.com.