Things are looking up for the sleaze rock genre as another festival featuring “sleaze” bands is up an running with Hard Rock Hell launching the HRH Sleaze Festival in the UK on September 2 and 3, 2017. 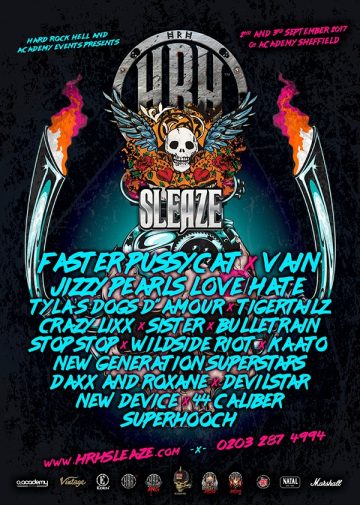 Often described as “heavy metal’s bastard child”, sleaze is as much about the attitude and pose as the music: music full of rebellion, aggro, and downright nastiness, not to mention more tight black leather and tattoos than most can comfortably dream of. It’s not, as they say, done in the best possible taste, but it kicks ass, especially live on stage – the HRH way.

“We experimented over at Camp HRH Pwllheli”, explains HRH kingpin Jonni Davis, “After that, by overwhelming HRH fan demand, we’ve given HRH Sleaze its very own weekend, with a horde of sleaze gurus from North America and all over Europe. We love this genre and by bringing together a carefully-selected cauldron of real pros, we’re cooking up something special. Bring on the sleaze!”

HRH Sleaze will debut at the O2 Academy in Sheffield between 2nd-3rd September, 2017. HRH has been at the cutting edge of staging music events for many years, never sits on its laurels, and has assembled an impressive line-up for its first standalone HRH Sleaze event.

No band epitomizes Hollywood sleaze more than Faster Pussycat and HRH are proud to announce the kings of sleaze will be getting down and dirty at this very first event.

Also joining the bill are Vain, a band that have earned themselves a cult status among sleaze fans over the years. This acclaimed band have been described in ‘Classic Rock’ as “unharnessed, haystack-haired heaviness from beginning to end”.

More sleaze to cross the Atlantic are Jizzy Pearl/Love/Hate. The band will be celebrating the 25th anniversary of their album ‘Wasted In America’ and what better place to do this than HRH Sleaze. Other class acts confirmed are;