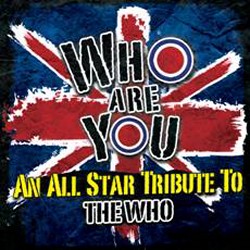 Hard Rockers Appearing On ‘Who Are You: An All Star Tribute To The Who’

On October 2, Cleopatra Records will release ‘Who Are You: An All Star Tribute To The Who’. As The Who approaches a nearly 50-year career, artists in genres from classic to progressive rock, and from punk to country, collaborate on a stunning celebration of the band’s remarkable catalogue.

The Who have sold over 100 million records, had 27 Top 40 hits, 17 Top 10 albums, and have been certified Gold (18 times), Platinum (12 times) and Multi-Platinum (5 times). They were inducted into the Rock and Roll Hall of Fame in 1990, and have been described as one of the greatest rock bands in history by Rolling Stone, the Grammy Foundation, VH1, and the Kennedy Center for the Performing Arts. Artists from Cheap Trick and Rush to Green Day and Pearl Jam have counted The Who as a primary influence. With such weight put on this legendary band’s musical output, the contributors to ‘Who Are You’ have brought every ounce of creativity, attitude, and reverence to the collection.

Anything can happen when you pair artists as diverse as K.K. Downing (Judas Priest) with John Wetton (Asia) and Derek Sherinian (Dream Theater), but the album opens with the trio’s impressive take on “Eminence Front”. A punk-infused version of “My Generation” with Knox (The Vibrators), Dave Davies (The Kinks), Rat Scabies (The Damned) proves both the music and message as timeless. Country superstar Gretchen Wilson adds her powerhouse vocals to the anthemic “Who Are You” with Randy Bachman (BTO) on guitar. Also featured on ‘Who Are You: An All Star Tribute To The Who’ are Iggy Pop, Sweet, Todd Rundgren, and The Raveonettes and members of Def Leppard, Deep Purple, Cream, King Crimson, MC5, Herman’s Hermits, Yes, The Vibrators and more.

‘Who Are You: An All Star Tribute To The Who’ will be available at your favorite record store and online retailers. The CD drops on October 2 with a 2-LP vinyl version being released on October 16.