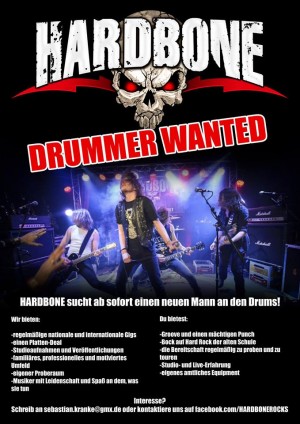 German rock and rollers Hardbone are looking for a new drummer after their drummer Caine recently advised them that he was leaving the band.

On December 9th, Hardbone made the following announcement on Facebook:

As Caine recently informed us, he is going to leave HARDBONE after the next show this Friday at Maria’s Ballroom. He made this decision of his own accord in order to face new musical challenges. We are proud to have been sharing the stage with him and look back on a successful, more than fun and adventurous time! We truly respect his decision and wish him all the best for his future.

Thanks for everything, bro! Your band buddies