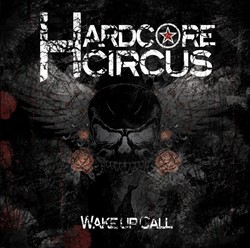 Hardcore Circus have re-released their 2010 debut ‘Wake Up Call’ through Demon Doll Records at demondollrecords.com/hardcore_circus.

With a killer band featuring members from Randy Piper’s Animal, Yngwie J. Malmsteen, Rob Rock and Zan Clan, these hard rock vets know how to rock with the best of them and deliver it with some serious attitude.

Their debut 10 song CD entitled ‘Wake Up Call’ weaves a slick mix of modern Motley Crue with the melodic qualities that made Bon Jovi a household name.

There are definitely more than a few songs here that could make a run at the radio charts including the soon to be favorites; “Under My Skin”, “Life”, “Who I Am” as well as the down and dirty rock anthems “Queen of Dirt” and “She Goes Down”. This album is littered with great melodies, great harmonies, great musicians, great production and most importantly — great songs!

Hardcore Circus has begun their ride up the ladder of Hard Rock success. The only question is… will you come along for the ride??

More information on Hardcore Circus can be found at www.hardcorecircus.net and www.facebook.com/pages/Hardcore-Circus/126695040717478.