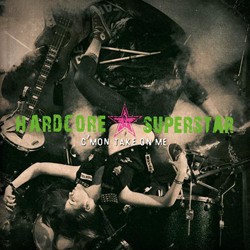 Swedish street metallers Hardcore Superstar are happy to present the album cover and track listing of their recently announced new studio album ‘C’mon Take On Me’. The album will be released as a CD in slipcase, digital download, black vinyl and strictly limited pink vinyl (only available at the Nuclear Blast mail order shop) via Nuclear Blast on March 1st, 2013.

With a wink, drummer Adde grants us insight on the idea behind the album’s artwork, “We came up with the idea during the recordings of the album. It’s just so sexy when a woman jumps into a drum kit — what could be more exciting? We discussed the concept with photographer Micke Johansson, who loved the idea. What we especially like about it is the combination of sex and bruises!”

‘C’mon Take On Me’ was produced by the band and mixed by Randy Staub (Metallica, Motley Crue, The Cult). Regarding the recording process the band stated, “We found this cool abandoned studio that we took over, where we spent the entire summer tracking songs in between the shows. Speaking of shows — we’ll start rehearsing in January so that we’ll be ready to play live everywhere again soon. If there’s a stage, we’ll rock it!!!”

Make sure to check out the first amazing single from the album “One More Minute”, at YouTube.com.