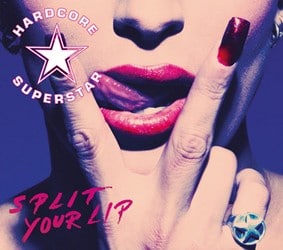 Hardcore Superstar have revealed the artwork to their upcoming CD ‘Split Your Lip’. Pre-order the band’s new album now at www.bengans.se/popup/hardcore_split/int.aspx?language=en and get a signed copy shipped directly to your mailbox on streetday — November 26!

The release of Hardcore Superstar’s new album “Split Your Lip” will be on November 26, 2010.

The first single will contain the songs “Moonshine” and “Guestlist” as A- and B-side and will be released exclusively with the November issue of Sweden Rock Magazine in the beginning of November.

The song “Moonshine” will have it’s world premiere on Bandit Rock on November 24.

“We recorded the album live in the studio in five days together with Tobias Lindell at Studio Bohus. We wanted it to sound like domestic violence” – Adde, HCSS