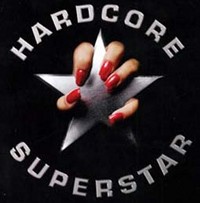 Hardcore Superstar’s self-titled ‘black’ album from 2005 has been chosen by Sweden Rock Magazine journalists as the third best album in the last ten years, and readers voted it as the twelfth best album, in the magazine’s ten year celebration issue — number #83, in stores June 14th.

To celebrate Hardcore Superstar will, for the first time, perform the ‘Black’ album live on Wednesday June 8th when they headline the first day of the Sweden Rock Festival.

“When I got the news I wanted to sit down and write such an album again”, said Hardcore Superstars drummer Magnus ‘Adde’ Andreasson. “We were extremely flattered and wondered how to pay them back. Yes, for the first time we will play the whole self-titled ‘Black’ album live, as a one time phenomena at the Sweden Rock Festival. We have, for example, never played the songs “Simple Man” and “Cry Your Eyes Out” live.”

Tickets for the Sweden Rock Festival, featuring the headliners Judas Priest, Ozzy Osbourne and WHitesnake, can be purchased at www.swedenrock.com.