Following the conclusion of their co-headline tour with Fozzy, Swedish veteran sleaze rockers Hardcore Superstar have announced that they will be releasing their next studio album in the spring of 2018. The group released a new song entitled “Have Mercy On Me” last month. 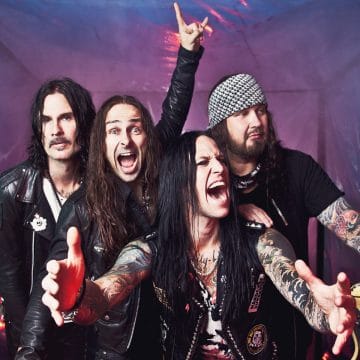 “After 20 amazing shows with so many highlights, so many new friends and so many awesome crowds we are all back home planning the next tour and putting the finishing touches to our new album that will be released spring 2018

Thank you to everyone who came to the shows, sang their hearts out and made every night so special. It was awesome to meet so many of you.

Special thanks to the guys from Fozzy, Madame Mayhem and The Last Band for being so badass every night and to our awesome friends from the Hardcore Superstar Italian Forum and the HCSS (Welcome To The Debauchery) Facebook Groups… you guys rock ??

Looking forward to seeing you all again very soon

Hardcore Superstar‘s “Have Mercy On Me” video:

Hardcore Superstar – Have Mercy On Me (Official Video)