Great news for Hardcore Superstar and Sleaze Roxx fans as the Swedish rockers will reportedly be releasing a new single in June and a new album in August in conjunction with two kinds of Hardcore Superstar liquors via a distillery in Sweden.

The following message was posted by Daniel Olin on Hardcore Superstar‘s Facebook page earlier today with a link to an article from Glicko: 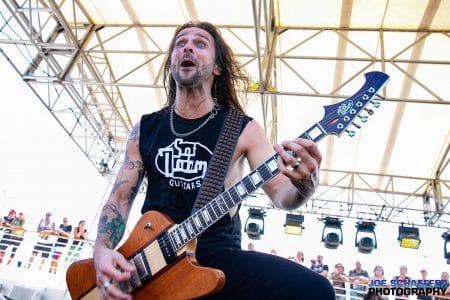 “Collectors and alcohol romantics! New call for alcohol! Two sorts of Hardcore Superstar liquor is on its way! They will be released this summer, by a distillery in West Sweden.

Translation from the interview with the distiller: “The first one is supposed to be released in June together with a new single, and the other one in August together with the new album.”

“It was actually one of the band’s founders who came to the restaurant last summer and tasted our gin, and later contacted us and after that we’ve had many fun and creative hours together to bring forth the taste of Hardcore Superstar.”

“They prefer pure Vodka and that’s where we started off, and that’s how we’ll launch the first Superstar Distillates. We can’t really reveal the taste since it goes together with their new single and later their new album, but the taste is rock’n’roll to say the least and everything else will taste like disco in comparison.””

The Swedish rockers have been working on a new album for some time as they posted the following message in part on their Facebook page way back on November 7, 2020: “The new albums coming together nicely!!”

“After 11 years in a row of having ’80s era artists or bands dominate the top spot of the Sleaze Roxx readers’ year end best album poll, we finally have a band that is part of the “new breed” take top honours. Of course, some may say that Hardcore Superstar are not part of any “new breed” as they have been around for 22 years (since 1997) and You Can’t Kill My Rock ‘N’ Roll is their 11th studio album. Nevertheless, it’s the first time since Sleaze Roxx‘s inaugural readers’ year end album poll in 2006 (when Buckcherry took the top spot) that an “older” artist or band not originating from the ’80s (or earlier) finishes at the top.

That being said, it was a neck and neck race between Hardcore Superstar and Judas Priest before the former pulled away garnering the most votes ever in a Sleaze Roxx Readers’ Top Album of the Year poll. Is You Can’t Kill My Rock ‘N’ Roll the best album that Hardcore Superstar have ever made? That topic is certainly up for debate but there is no question that You Can’t Kill My Rock ‘N’ Roll is a true return to form for the sleaze “veteran” rockers and is apparently much more appreciated by the Sleaze Roxx readers than Hardcore Superstar‘s previous studio album HCSS, which finished at #12 on the Sleaze Roxx Readers’ Top 20 Albums of 2015.”