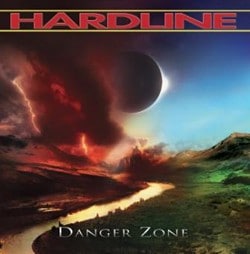 Frontiers Records is pleased to announce the release of Hardline’s new studio album entitled ‘Danger Zone’ on May 18th in Europe and May 22nd in North America.

Following the release of ‘Leaving The End Open’, Hardline’s mastermind and singer Johnny Gioeli did not realistically feel that another Hardline album would have seen the light of day sometime soon. It was again thanks to the insistence of Frontiers Records President Serafino Perugino that the concept came about once again. “I love surprises and this was certainly one of them”, says Gioeli. “Each time I decide to close the door on Hardline, I get the itch to continue”.

Fate wanted that when Perugino sent Gioeli some song demos written by Alessandro Del Vecchio (an Italian musician and producer know for his work with Edge of Forever and Eden’s Curse but also with Axe, Mitch Malloy, Bobby Kimball and several other top musicians and bands), the singer became excited once again and wanted to give it another go.

“Ale is one talented brotha…” tells Johnny, “he plays, writes, sings, engineers, produces and mixes… He’s like the golden goose handed to me. More than all the talent he has, he is an example of a great human in many many ways. I look forward to making more music with Ale. And it doesn’t hurt that he’s Italian too!” Alessandro Del Vecchio says: “I feel humbled but at the same time excited as never before. I grew up with ‘Double Eclipse’, which I bought when I was 13, so it’s really a combination of feelings. The whole thing started so naturally that I feel like me and Johnny have known each other for years. Our goal was to match the superb quality of that milestone of a debut and we worked hard to get to it, but we also wanted this record to be a shift and the truthful mirror of this “new” life for Hardline”. And, according to Gioeli “I think all of the Hardline records have a magic about them… this one certainly holds a more commercial pop sound to its heartbeat. I love it.”

“I would absolutely LOVE to tour with these guys. I think the fans would be quite surprised when they hear this band….like a good solid kick in the teeth” concludes Gioeli and certainly discussions are ongoing to have finally Hardline play some dates around Europe in support of this exciting new release.

Hardline was formed when brothers Johnny (vocals) and Joey (guitar) Gioeli, originally from the band Brunette, teamed up with Journey/Bad English guitarist Neal Schon. The original plan was for Neal to produce Hardline, but as he was having so much fun he decided to join the band as soon as he left Bad English. They immediately added established musicians Todd Jensen (David Lee Roth, Alice Cooper) on bass and Deen Castronovo (also coming from Bad English) on drums to the mix and the result was magnificent. They went on to record their debut album ‘Double Eclipse’ for MCA in 1992 and then went on the tour circuit with such heavy hitters as Van Halen and Mr. Big.

The first single from ‘Double Eclipse’ was the song “Hot Cherie”. While never popular in the mainstream, various radio stations worldwide started to play it and Hardline’s fanbase started to grow. They released a video to MTV, but did not get much airplay. By that time grunge and alternative had already taken over and Melodic Rock was being pushed aside. Tension among band members, the record company, and perhaps certain egos, got in the way of an immediate follow-up album, despite the band having written more than enough material.

While Neal re-started his adventure with Journey in 1995 (again together with Deen Castronovo), Johnny stepped out of the music business eventually to return as Axel Rudi Pell’s singer in 1998 on the album ‘Oceans Of Time’.

But years later Johnny and his brother Joey were ready to give it another go with Hardline after the call of Frontiers Records, and with an all new line-up they produced the awesome return album ‘II’ in 2002 with Josh Ramos (of The Storm and Two Fires fame) taking Neal Schon’s place on lead guitar.

Hailed by critics and fans alike as a top return, the band returned on stage headlining the GODS Festival in Bradford in June 2002, before Johnny and Josh started to work on new songs which eventually saw the light of day on the ‘Leaving The End Open’ album released on Frontiers in may 2009.