Hardline frontman Johnny Gioeli has started a Pledge Music campaign to raise funds for his debut solo album. The powerhouse singer has recently posted a video providing a preview of his song “Drive” which will be appearing on his upcoming debut solo album. As of press time on May 10, 2017, Gioeli had already raised 187% of his Pledge Music campaign goal with 143 days still to go. 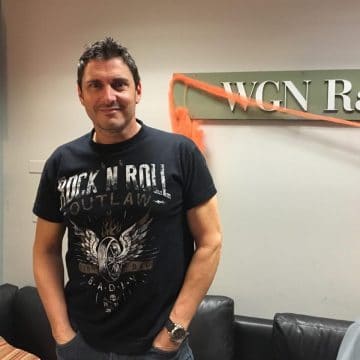 The following message was posted on Gioeli‘s Facebook page back on May 5, 2017:

“Hey everybody! I just wanted to take a minute to say hi today, especially since we have soooo many more people on the page now. Amazing! And, for those of you who are kind of new, you may not know I am working on my first solo album. For those of you who aren’t new, you know it’s been taking a long time! LOL

I want to thank you all for your patience. After all the touring and the new Hardline album release last year, it really set things back. But…the album is releasing this fall, it is called ONE VOICE and it is an absolute privilege to be making this album with YOU.

So…what’s this record gonna be? Is Johnny going country? Death metal….or, dear lord….grunge? hahaha!! Never! I’m the same guy you’ve known since the early 90’s when the first Hardline album Double Eclipse released. I love a big ballad, I love guitar driven rock, melodic hard rock. If you’ve listened to Hardline, you know who I am….and for my Crush 40 listeners, you know me too. I love a song that lifts you up, gets you moving and gets you in a positive frame of mind.

Today we’re sharing one of the songs that will be on the record. You can see more of this update, and the other updates by going to my Pledge Music page and signing up. You can get involved at any level, from the digital download, to the solo CD or the extra “EP” that I’ll be recording – yes, I am finally recording the song Colorblind! So whatever floats your musical boat – just remember that ALL pledges get you the digital download of the album and access to all the exclusive updates. I’m so excited to be heading into the final stretch here and couldn’t be doing it without you. A big portion of the money raised for this album is going directly to help a young man named Joe Barber, in his recovery from an accident last year that left him paralyzed. So not only are you helping make a record, you’re helping me ‘pay if forward’. The power of music is amazing – especially when it is used to heal.

Thank you all, from my heart.

Video from Johnny Gioeli including preview of new song “Drive”: