Hardline and Axel Rudi Pell lead vocalist Johnny Gioeli has released a video for the title track of his debut solo album One Voice, which was released via Frontiers Music Srl back on December 7, 2018. 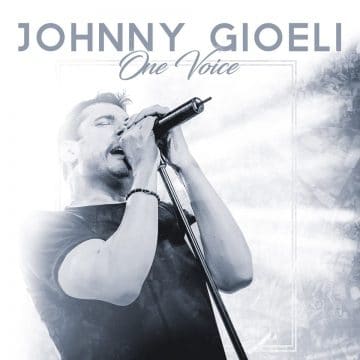 “Singer-songwriter Johnny Gioeli has released his brand new music video for “One Voice” the title track to his newly released solo album.

Known for his love of soaring ballads, Johnny has been garnering high praise for this one, written in tribute to the fans who came together in a pledge campaign to make this record. The video showcases Gioeli’s talent for writing a great ballad, along with a message of hope.

One Voice has become an anthem for sharing a message of unity and strength in numbers. Says Gioeli, “together we are one voice, and we can change things for the better. This album is proof. Thousands of people coming together and donating to a kid they don’t even know.”

The great percentage of funds raised by this album are hometown based, going to Joe Barber, a family friend – a young man paralyzed from the neck down following a diving accident. Just this fall, Joe started community college and he’s getting regular physical therapy. “That didn’t seem possible two years ago. I just couldn’t let that accident be the end of Joe’s story. ”

Gioeli is currently exploring possible tour dates for One Voice.”

Subscribe here for more videos – http://radi.al/SubscribeFrontiers | From the album ONE VOICE. Get your copy NOW: http://radi.al/JohnnyGioeliOneVoiceFollow …