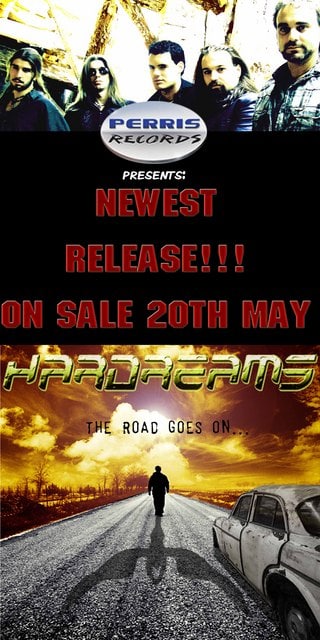 As Hardreams have said before, things have happened so quickly that now they can already announce that their new album will be released the next 20th May through the American label PERRIS RECORDS, for a worldwide edition and distribution.

The final title of this second album is ‘THE ROAD GOES ON’ and it includes the following tracks:

In December 2001, all the accumulated work ended up with the recording of a demo: “WINGS ON FIRE “. This work includes four songs and shows a pure melodic hard-rock sound with a personal atmosphere. This was just the beginning of what, by that moment, was only a “hard dream”.

“WINGS ON FIRE” was recorded in AURHA studies in Barcelona, with the prestigious engineer Mauricio Tonelli (Sangtrait, Meat Loaf, etc.). After this recording, A. Landeira left the band and was replaced for David Ruiz in the keyboards. In all those songs we can find powerful riffs of guitar and captivating melodies which reveal some influences that come from the pure A.O.R. of bands like MAGNUM and SURVIVOR and also from the hard powerful rock of DOKKEN, QUEENSRYCHE, WHITESNAKE, etc. Everything treated with a fresh and modern sound. The good result that they got in the different mass media and the great reception in the direct shows as well allowed the band to get their first recording contract with VINNY RECORDS.

The first long-length work, called “CALLING EVERYWHERE”, was recorded during the summer in 2002 in AURHA studies and NAUTILUS in Barcelona. It was mixed and masterized by the famous music and producer Carlos Creator, in Rockstudios in Bilbao. This work includes eleven songs, where there is a mixture of different styles keeping in the hard A.O.R. That attracts a kind of audience with more melodic tastes and the followers of the harder rock either. The edition of the album was in March 2004. When the album was released, David Ruiz left the band and Quique Carmona, a good friend of the band, contributed from time to time on the keyboards. Hardreams initiated a promotion of themselves with several shows, sharing stage with artists like BOB’S CATLEY (Magnum), VAUGHN (Tyketto), FIREHOUSE, JIM PETERIK (Survivor, Mecca, Pride of lions). They also did different shows in a national level like in the third edition of the prestigious festival NEMELROCK in Madrid.

Unfortunately, the recording company Vinny Records, gave up his recording activity just after the disc was released. That made impossible any possibility of promotion and selling of the disc. However, this fact didn’t affect the strength of the band. In spite of that, it stimulated the hope of keep on expressing their own music style. Finally, Sergi Segarra got the keyboard player place. That’s how the current band formation is completed and also how it is presented in several shows since then on, like in the remarkable performance in the prestigious Ripollet Rock Festival 2006 sharing stage with the Germans EDGUY and others.

The band recently recorded a new album, which is called “The Road Goes On” and contains 11 new tracks. In this new album, Hardreams keep on producing their true hard melodic style. However, in this new work, there is also what we could call the result of their natural evolution and experience effect. So now there are tracks which are more direct and powerful, containing exquisite melodies, but always keeping the good quality of sound that characterizes their earlier productions. This new work has been recorded in AUHRA and BOO-BOO’S studies in Barcelona with Tomi Perez as an engineer, co-producer and manager of sound mixtures. Recently, the band signed a manufacturing and production contract with the north-American label “Perris Records”, for a worldwide releasing of this new awaited work. The album is going to be available from May 20th 2008. So don’t miss it!