Brazilian hard rockers Hardstuff have released a video for their song “Bad Love.”

The group’s “Story” on its Facebook page with Google translation and further edits states: 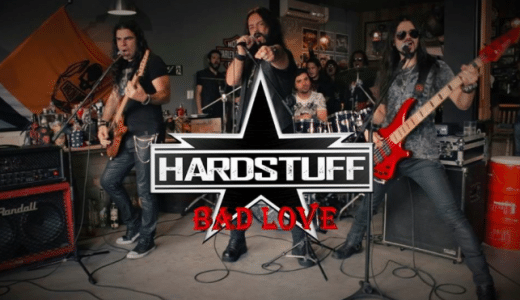 “Formed in São Paulo since 2012, Hardstuff has achieved its good reputation playing the best of rock of all eras, with a varied repertoire of hits. The suggestive name does not deny the specialty in hard rock – a style forged by icons such as Van Halen, Whitesnake, Bon Jovi, Guns N’ Roses, Led Zeppelin, Deep Purple among others.

Having as a priority to bring the audience the complete experience that a rock show provides, with attention from the costumes to the performance, Hardstuff consolidated its name in São Paulo by playing in important houses of the style. Rodrigo Grecco (vocals) and Olavo Oliveira (drums) have bands such as Children Of The Beast (Iron Maiden tribute band), Rock Stock Destroyer (Kiss tribute band) and Heaven & Hell (Dio tribute band), as well as solo and group work.

With more and more shows and the rise in the public eye, in 2016, the group came up with the EP “Hardstuff“, financed with success by the fans through crowd funding and produced by the Latin Grammy winner Paulo Anhaia. The result is vigorous and melodic hard rock, with a sound that refers to the sound of bands like Eclipse, Gotthard, Whitesnake and Van Halen. The band continues to schedule shows at festivals and events for even larger audiences.”