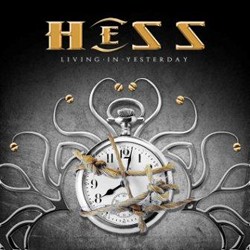 Frontiers Records is pleased to announce the release of Harry Hess’ new solo album entitled ‘Living In Yesterday’ on August 24th in Europe and August 28th in the US.

Best known for spending 17 years as frontman of Harem Scarem, one of the most well known and respected melodic hard rock bands to come out from Canada, Harry Hess has been redesigning his career as music producer and songwriter.

After Harem Scarem’s decision to stop recording more albums, the next natural step for Harry was to start working on a solo album which he has been expertly crafting little by little in his Toronto studio. Still, the songs included in ‘Living In Yesterday’ are the result of Hess’ travels around the globe over the last few years with stops in Stockholm, Amsterdam, Brussels, Nashville and Germany.

With this CD Harry intends to go back to certain sounds and atmospheres leaning more towards melodic rock music. “This record is more a continuation of where I left off with Harem Scarem” says Harry. “I am a rock singer and it’s really hard for me to open up my mouth and sound right doing any other style of music so I really embrace that now and build the production around my vocal style”.

The musicians featured on the album include his former Harem Scarem bandmates Pete Lesperance, Creighton Doane and Darren Smith, along with Tommy Denander, Marcie Free (Unruly Child), Howie Simon (Jeff Scott Soto) and Magnus Karlsson (Primal Fear) among others. “This whole record was built on the co-writes and on the collaborations I have been doing all around the world the past 3 years” continues Harry. “There were some great writers involved and it was fun to try new things but still make it work with what I do”.

The new album is a superb slice of melodic rock which features a monster vocal performance from Harry, fabulous songwriting and a crisp production. “I’ve never been a big fan of my own work but there are few songs on this record that I feel are some of my best to date,” concludes Harry.

It is possible to stream in full the first song from the album ‘Living In Yesterday’ on the Frontiers Records webradio at www.frontiers.it/webradio and on Harry Hess’ Facebook page at www.facebook.com/harry.hess3.