Frontiers Music Srl has just announced that Canadian rockers Harem Scarem‘s homecoming show at the Phoenix Concert Theatre in Toronto will be released on a double CD/DVD and Blu-ray on December 4, 2015 and entitled Live At The Phoenix.

Frontiers Music Srl’s news release (with slight edits) states: “…Available in 2CD/DVD, Blu-ray and Digital formats, this new release, marks the first proper live album recorded by Harem Scarem in front of their “home” audience. Singer Harry Hess explains, “Canada is where we started touring all those years ago and to be able to invite our friends, family and fans to this show was cool.” Recorded live on Saturday July 11th, 2015 at the Phoenix Concert Theatre in Toronto, this happened to be the perfect time and venue for the band to capture live recordings of numerous songs from their latest record Thirteen and also to revisit their classic early material. It was an honest and raw performance showcasing the repertoire of a band which is at the top of their game. “It wasn’t easy coming up with this set list but I think we got to all the important stuff plus it’s always fun to play the new material that you haven’t been playing for 20 years. It is definitely the most extensive live recording and video that we have ever done and the quality of both the video and audio are by far the best of anything we have ever done,” says Harry.” 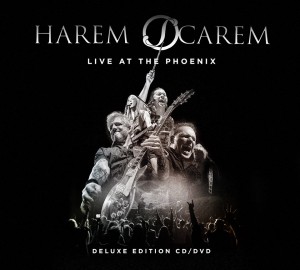 The track list for the DVD is the same as for the two CDs.