Reports are surfacing that AC/DC‘s long-time frontman Brian Johnson has reluctantly quit the band after getting the very bad news that he would risk total hearing loss if he sang on AC/DC‘s now rescheduled 10 date tour of North America, which was originally scheduled from March 8, 2016 to April 4, 2016. 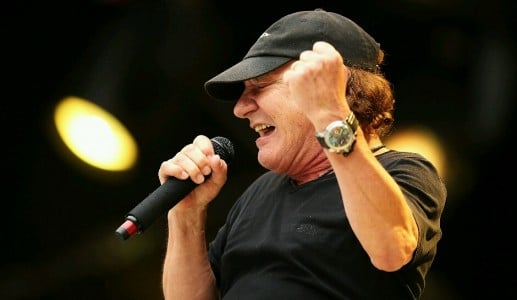 Peter Vincent stated early on March 9th in both New Zealand’s stuff.co.nz and Australia’s The Sydney Morning Herald (due to those countries’  time difference compared to Toronto, Canada) that: “With Brian Johnson reluctantly quitting as AC/DC‘s singer the question has to be asked: is this the end for AC/DC, not only Australia’s biggest band but one of the world’s biggest?”

AC/DC have not confirmed whether Johnson has actually quit the band but has confirmed that their recent upcoming North American tour dates will be rescheduled with possibly a guest lead vocalist. Yesterday, AC/DC posted the following message (in part) on its website: “AC/DC are forced to reschedule the 10 upcoming dates on the U.S. leg of their “Rock or Bust” World Tour. AC/DC’s lead singer, Brian Johnson, has been advised by doctors to stop touring immediately or risk total hearing loss. Tomorrow’s show in Atlanta through Madison Square Garden in New York, NY in early April will be made up later in the year, likely with a guest vocalist. More information regarding these rescheduled shows to come. Current ticket holders can hold on to their tickets for the rescheduled dates or receive a refund at point of purchase.”