Have Angels In Vein and guitarist Stacey Blades parted ways? 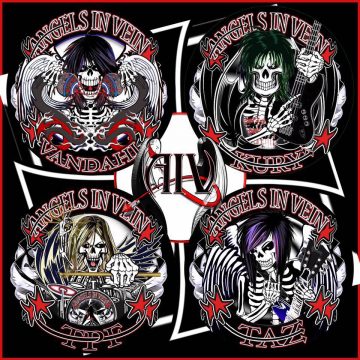 That is indeed the question as earlier today, Angels In Vein have updated their Facebook profile photo with four circles and each circle seemingly representing a member of the band with the band member’s “nickname.” The four circles appear to represent singer Chris VanDahl (“VanDahl“), guitarist Todd “Taz” Anthony (“Taz“), bassist Adam Kury (“Kury“) and drummer Troy Patrick Farrell (“TPF“).

Since August 11, 2016 or so, Blades has been busy as a touring guitarist in drummer Bobby Blotzer‘s version of Ratt.

Interestingly, Blades‘ Facebook Home page only mentions that he is a lead guitarist for his project Let It Rawk and a former lead guitarist with L.A. Guns. It is also mentioned that he has toured and recorded nationally with Roxx Gang, L.A. Guns and Ratt. There is no mention of Angels In Vein.

Blotzer posted a Facebook message yesterday for his version of Ratt that indicated that “Maybe a few changes” which could perhaps mean some more line-up changes on his end.

Of note, when Angels In Vein first surfaced with their original line-up which included Blades and bassist Eric Stacy rather than Kury, all five band members were represented with the aforementioned circles which included their “nicknames” on their respective circles (see below).

Blades and VanDahl were interviewed by Sleaze Roxx back in June 2016 and in Part 1 of the interview, VanDahl advised how he and Taz found the other band members: “Well, Angels In Vein started — like I was saying earlier — it was a labour of love. I have been performing professionally as Steven Tyler for Legends In Concert all over the world for the past five years and I woke up one day and I was like, “Man! I need to get in touch with who I am again. I’ve got to do something that is relevant to me.” And that’s 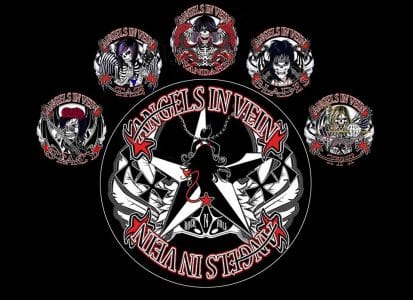 kind of how it started. And I reached out to Taz. We’re long long time friends. We moved from Detroit to L.A. together back in the ’80s when we formed Cherry Street. So I reached out to him. I don’t know. It’s got to be going on two years ago and I said, “Look. I want to do something original.” Like the next day, he had sent me — I don’t know — like 13 songs ghat he had been sitting all like forever! I mean, they were sitting in a drawer somewhere. And that’s kind of like where it began.

I am not exactly sure how long ago it was but I got a call from Stacey whom I have been in regular touch for years now. He had an event that he was planning out here in Las Vegas that he asked me to sing for. We had planned it before with that. The event itself fell through and then we got to talking about what each of us were doing and I told him that I had this thing I was working on. He said, “Well, let me hear it.” So I sent him some music and he called me back and he said, “Look man. Listen. Let’s turn this thing into a band.” And he had been working with Eric [Stacy] on this other event thing and he brought Eric in and that’s pretty much when this became a real band. That’s when it became — you know what I mean — a cohesive unit.”

Angels In Vein have recently released a new single “Ready To Roll” which is available for purchase on iTunes.