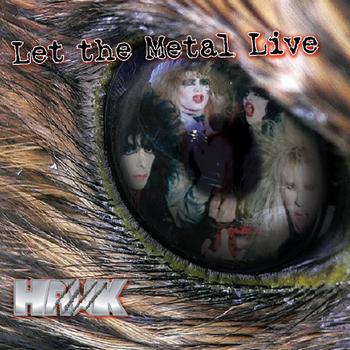 FnA Records is set to release a piece of musical history. In 1985, Heavy Metal band HAWK recorded an album that would never see the light of day. Within the last twenty-four years from when the album was recorded, all the members of the band have gone on to have stellar careers.

Hawk featured Scott Travis who would leave Hawk for Racer X and then eventually become the ongoing drummer in Judas Priest; one of the worlds greatest Heavy Metal bands. Lead singer Charlie Wayne Morrill would eventually front King Kobra and be a major player in the development of the Bullet Boys. Lonnie Vincent also became a member of the Bullet Boys. Lastly, Doug Marks went onto form Metal Method; a highly successful instructional music video company.

Although the band wore a lot of make-up, they were definitely a heavy metal band with tunes like Witches Burning, Overkill, Burning Leather, and Don’t Try To Stop Me. The 10 track album also featured one ballad entitled No One 2 Love.

When FnA Records (www.fnarecords.net) uncovered this gem in 2009 and found out that it had been sitting in the vaults all these years, they knew they had to release it. FnA Records named the album LET THE METAL LIVE after one of the tracks on the album and how appropriate that is for the times.

The album is slated for release on September 1, 2009, although it has been readily available online for the last month.

FnA Records, LLC. is a new record label formed in 2009 to bring Rockers and Metal heads some of the best unreleased and hard-to-find music from the 80’s and early 90’s. We are also a label that allows you, the fans to bring us music that you remember from “Back In The Day”, and to have it professionally released.