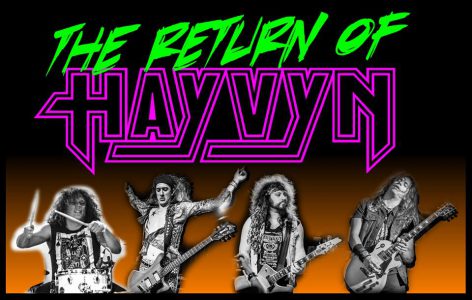 Speaking exclusively to Sleaze Roxx, Wilson and Elfont spoke about the return of Hayvyn.

In terms of Hayvyn‘s history, Elfont stated: “Hayvyn was created by the eye candy, frontman, and visionary of the band Con Jon. The band started out playing smaller battle of the bands and house shows in the early days. There was a resurgence in the last few years after some local musicians and friend of Con‘s heard some demos and he and those guys decided to start back up with them playing local bars and venues. Between opening for a few national acts in the last few years, such as Queensrÿche and Danger Danger, and a local demand for glam — I see a future song title here [laughs] — has really lit a fire under our asses and has helped us realize that Hayvyn really has some serious potential.” 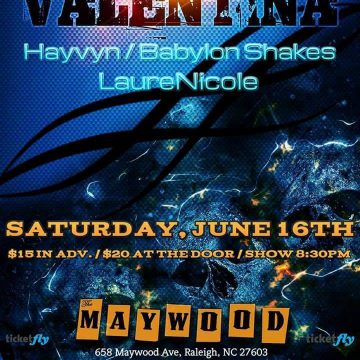 stated: “I was approached by Tom after I left my previous band about taking over their lead guitar spot and I immediately said yes. I’ve known Connor and Tom for years and shared the stage with them as well. It was a perfect fit for me.”

With respect to where the band name Hayvyn originates from, Elfont advised: “The band name follows the idea that the band is a haven for rock n roll and partying, and changed the spelling to Hayvyn because it looks cooler on a logo. Over the years, catchphrases like “Hayvyn a good time” or “Cravin’ some Hayvyn” have been used by the band and friends, which is always a rad reminder that the band name is the perfect fit for our music and the type of show we put on.”

In regard to Hayvyn‘s future plans, Elfont stated: “The future of Hayvyn? Well, we have our comeback show June 16th at The Maywood in Raleigh, North Carolina with Kickin Valentina. It’ll be the first time we have played out since August of last year, and we will be putting this lineup through its paces. Our practices have been awesome and I believe this is by far the best sounding line-up and most creative collaborative group effort to date. Dee Williams, formerly of Appetite For Destruction and many other bands over the years, is stepping in on drums at the same time as Kip is joining the band. Along with pounding the skins, he’s got a set of killer pipes and really nails vocal harmonies well. I’m moving from guitar to bass and Kip is taking my place as lead guitar… so basically a full line-up change! After our show in June, we will be focusing on getting some recordings and songwriting done while getting in some shows under our belt. So if you’re “hayvyn” a cravin’ for rock n roll in the form of something like KISS, Whitesnake, Thin Lizzy, Hayvyn will be happy to provide a good time!”

Hayvyn playing “Hellfire” at The Maywood in Raleigh, North Carolina, USA on August 20, 2016: