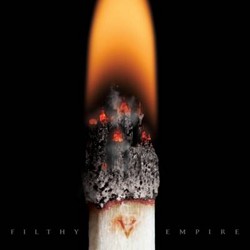 UK hard rockers Heaven’s Basement are proud to reveal the cover art and track listing for their debut album ‘Filthy Empire’. The album has now been confirmed for a February 5th, 2013 North American street date via Red Bull Records.

‘Filthy Empire’ is produced by John Feldmann (The Used, Papa Roach, Black Veil Brides) and is the follow-up to the band’s independently-released, acclaimed EP, ‘Unbreakable’. The video for the first single from the forthcoming album, “Fire, Fire”, directed by Michael Maxxis (Ours, Sum 41, and Our Lady Peace), is streaming now on YouTube.

Originally formed in the East Midlands in England, Heaven’s Basement have already toured with the likes of Buckcherry, Papa Roach, Theory Of A Deadman, Shinedown, and more, and played this year’s Download Festival in the UK to a packed tent of more than 5,000 fans. Kerrang declared earlier this year, “Heaven’s Basement play as if their lives depend on it. They should already be a big name — bristling riffs and jagged, riotous hooks are their poison and exceptional is not too strong a word.”

For more information on Heaven’s Basement, make sure to check out heavensbasement.com and www.facebook.com/HeavensBasement.