Philadelphia, Pennsylvania, USA rockers Heavens Edge consisting of lead vocalist Mark Evans, guitarists Reggie Wu and Steve Parry, and drummer Dave Rath have found a replacement for their departed bandmate / bassist George “G.G. Guidotti who passed away from lung cancer on August 18, 2019. Guidotti‘s replacement is none other than current Tantric and former Mach22 bassist Jaron Gulino. The new Heavens Edge bassist played on Mach22‘s Like My Chances EP, which landed the #1 spot on the Sleaze Roxx’s Top Ten Albums of 2015. 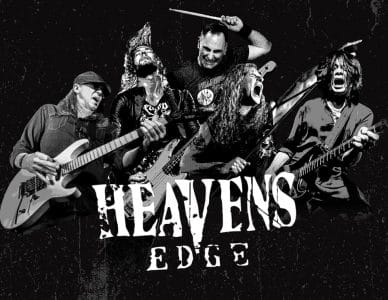 George was always asking when the next gig was. So much of who he was stemmed from being on stage. Everyone who knew him knew how much he loved being up there under the lights. We want to honor George by keeping his memory in the spotlight and his legacy alive. We look to do exactly that in 2020 as we perform a few shows and maybe even record some new music.

We know we can’t replace George. All we can do is find someone to join us in giving it everything we’ve got the way we always have. We found someone we know George would back in bassist Jaron Gulino. Jaron comes from the Philly/Jersey area having played with the band Mach22 and most recently as the bassist for the band Tantric. Jaron is a relentless touring musician with a killer attitude and bass chops that will help Heavens Edge play at our best.

We’ll be performing on the Monsters Of Rock Cruise in February, 2020. We’ll also perform at M3 in Maryland this May.

We look forward to seeing you all again and keeping the party going in honor of our brother George.