Heavens Edge guitarist Reggie Wu was recently interviewed by Andrew DiCecco for Vinyl Writer Music. Wu was asked about his recollection of his audition for Cinderella to which he stated (with slight edits):

“I just remember learning the songs, and unfortunately, I was in my Yngwie [Malmsteen] phase at that point. There was a club in Baltimore called Hammerjack’s, and that was the club to play for all of us back in the day. It got knocked down for the Ravens’ stadium, and they reopened it somewhere else. Some guy came here to interview me about Hammerjack’s because we were one of the bands that always used to play there. That guy also interviewed Jeff [LaBar], so when Jeff passed last year, that 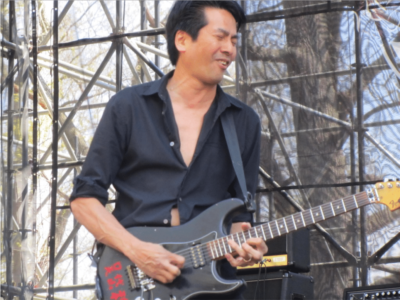 gentleman sent me and Jeff’s interview separately, and we were both talking about our audition. So, I just remember going in and playing “Nobody’s Fool” as fast as I could, which is awful, because that’s not what the song called for. I was in that phase, like, “Oh my God. Play as fast as you can!” Jeff got the gig and he totally deserved it. Super, super happy for him, and they went on to have super success. Everything’s for a reason — I obviously was really sad — but we still get to play with Tom [Keifer] on all these M3’s and cruises. So, at least we get to hang out with him, and still see him. And he’s still doing solo albums. He’s such a talented musician; so happy that he’s out there representing Philly, and still kickin’ ass.”

DiCecco asked whether Wu‘s audition was at Hammerjack’s and the guitarist replied: “No. That was upstairs at The Galaxy, if I remember. The Galaxy was the club that we all played, this local dive. It was such a cruddy little club, but Bill Haigh — God rest his soul — he would let us play originals. Nobody would allow you to play originals in this area. The thinking in this area is when people come out to see bands, they want to dance to songs they know. So, that’s why we never had our Sunset Strip. Back in the day, the big thing was to play Wildwood Crest. You had to be a cover band to get down there. I’d go down there, and see these clubs with hundreds or thousands of people just going crazy for these cover bands, and we’d be around the corner at these local dives, playing for fifty people. But in the long run, I’m happy that we went that route, and played all originals.

So, the audition was upstairs. Jeff talks about how Tom’s like, “Well, who wants to go first?” And Jeff’s like, “Well, I’m going! I’m not going after Reggie!” So, Jeff gets up there and Jeff said I took a chair and sat right in front of him to put some fear in him. I’m like, “I would never do that!” That’s the last thing I would ever do. [Laughs]. But I guess that’s the way Jeff felt. I did have equipment problems; all of a sudden, my guitar was feeding back. I just sucked that day. It was all good. It’s all for a reason.

You know what? Cinderella broke the doors open for all of us. Then it was like, “Oh my God! You can get a record deal from Philadelphia!” Britny [Fox] followed right after that; Tangier; us. So, Cinderella is the one that opened the door. When Bon Jovi started coming to The Galaxy — he wasn’t big at the time, but he was still kind of famous — so we were all still like, “Oh my God, that Bon Jovi guy from North Jersey is here.” He really loved Cinderella. And thank God for him; he opened the door for them.”

You can read the rest of the interview with Reggie Wu at Vinyl Writer Music‘s website.