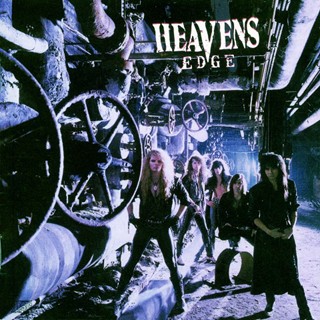 Assembled from the cream of local Phili bands, Heavens Edge rapidly snagged a substantial deal with industry powerhouse Columbia Records, who at the time were a label eager to increase their market share of profitable melodic rock acts. Renowned British producer Neil Kernon (Dokken, Queensryche, Autograph etc) was tapped to produce but when the album was delivered they found a new label hierarchy had taken over… one much more fixated on theembryonic sounds of grunge.

Originally released in 1989, ‘Heavens Edge’ contained a bumper selection of loud and proud hard rock anthems, tracks that were easily comparable to their contemporaries bringing to mind a delicious blend of Bon Jovi, Ratt and Dokken; fiery melodic rock with a finger firmly on the trigger all wrapped up in production to die for. It doesn’t get much better than this.

Rock Candy Records has reissued heavens Edge with 24-bit remastering from original source tapes, three bonus tracks, 4,000 word essay about the making of the album, interview with band members and additional previously unseen photos spread out over a 16 page full colour booklet. The CD can be pucrhased at www.rockcandyrecords.co.uk.