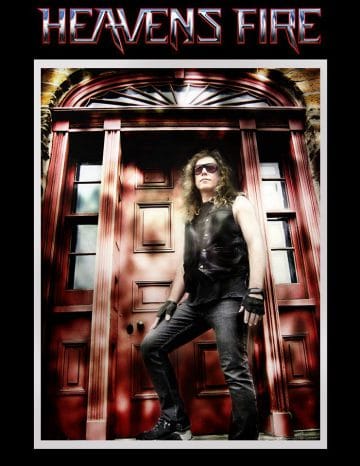 “Feb 21 2019: We at Heavens Fire would like to introduce to you our new lead singer: Maxel Black!!

We would also like to wish Bennett Rafael aka “RAFA” all the best in his future musical projects as we remain close friends. Rafa‘s home life has changed from what it was when he first joined and as such, cannot keep up with touring demands. While Darren Smith has expressed interest in rejoining the band and doing a record with us again someday, he is currently touring the new Red Dragon Cartel album and doing very well with that!

TOURING PROBLEMS – Just weeks after the release of Judgement Day in 2013 and Playing With Fire in 2017 we had the misfortune of losing touring ability due to our lead singers not being able to commit….

“Poetic Justice” – is the working title of the new album slated for an early 2020 release with 90% of the album’s music already written and recorded. Maxel Black is currently listening to the pre-production demos and is expected to contribute on some level with Carsten Lizard Schulz in the writing of the albums lyrics and vocal melodies.

We recently played to a near sold out crowd in Toronto where Maxel performed a 35 min set of music to our fans. Their stamp of approval was LOUD and clear that night making the decision to go forward with Maxel an easy one. In 2016 when Rafa‘s VISA was first denied, Maxel actually came very close to replacing Rafa but JT is a very loyal guy and didn’t want to give up on Rafa quite yet, especially after the incredible effort he gave in the recording of the “Playing With Fire” record.

In the end, it would seem fate has chosen Maxel and we couldn’t be happier! Please leave a comment below and welcome him to the Heavens Fire family!

Heavens Fire‘s “Children of The Storm” video (from Playing With Fire album):

Here’s our first official video in support of our brand new album “Playing With Fire” now available on CD and iTunes! CRANK IT!!!!! https://store.cdbaby.com/…

Heavens Fire with Maxel Black on lead vocals performing “Screamin'” live at The Rockpile in Toronto, Ontario, Canada on February 15, 2019: