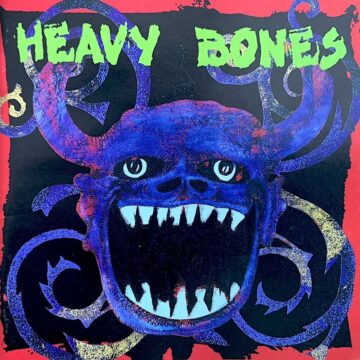 You can purchase the reissued Heavy Bones album via Bad Reputation Records‘ website.

Sleaze Roxx stated the following in its review of Heavy Bones:

“Featuring former members of Cats In Boots and Quiet Riot, as well as guitar virtuoso Gary Hoey, Heavy Bones had an abundance of talent. “The Hand That Feeds”, “4:AM T.M.” and “Where The Livin’ Is Easy” are the great rockers on this release while “Turn It On” and “Anna” show the band’s sensitive side with exceptional results. Also thrown in are the instrumental “Enormodome” and the acoustical “Beating Heart”.

The sound here is melodic metal similar to Hardline, with of course some Cats In Boots sleaze thrown in. Heavy Bones was very talented but unfortunately the group got pushed aside when grunge was taking over the airwaves. Heavy Bones deserved more recognition, as they were sadly ignored when they hit the scene — this release gets two thumbs up!”