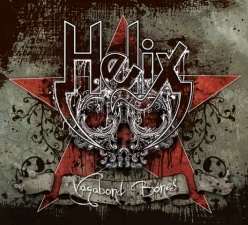 Helix vocalist brian Vollmer has made the following announcement regarding the return of the original 80’s version of Helix:

With the new CD Vagabond Bones being released next week, the original 80’s lineup of Brent “The Doctor” Doerner, Daryl Gray, Greg “Fritz” Hinz, and Brian Vollmer plus newcomer shredder Kaleb Duck are ready to roll! We have four dates in the Canadian Maritimes slotted for November, so everything is heating up here at Planet Helix. Next Tuesday we’re getting together for practice to start re-working the set for our upcoming dates and the new CD’s release. Some of the new songs we plan on adding are Vagabond Bones, The Animal Inside, and Go Hard or Go Home. In regards to older material we haven’t done in awhile, we’re probably going to put Shot Full of Love back in at the request of “Doctor” Doerner.

Kaleb is especially excited about our upcoming dates. Whereas the rest of us have been to the Maritimes many times, Kaleb has only been out once, and that was only to fly to Halifax for the release of the Trailer Park Boy’s movie a couple of weeks ago. He’s never experienced driving out there, so these dates coming up will be quite the eye opener! Right now we’re also working on following up those dates with a northern Ontario run including Sault Ste. Marie, Thunder Bay, and Kenora (if everything works out). Two dates have also been already booked for next year-one is a casino in Connecticut and the other is The Mussel Bed Soiree in Lewisporte, Nfld for next August.

Here are the new dates: