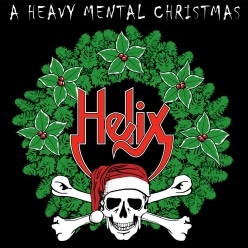 The day after Halloween we will be releasing the first-ever Helix Christmas CD entitled “HELIX-HEAVY MENTAL CHRISTMAS”. The CD will be available in Walmart stores across Canada, and we have been told it will be front racked, along with the soon-to-be-released AC/DC & Metallica CDs. The CD will be distributed by Fontana/Universal.

We are very excited about this project, and with good reason. We’ve done some different versions of traditional Christmas songs, as well as taking a few contemporary numbers and jazzing them up, ie. “Simply Having a Wonderful Christmas Time” by Paul McCartney. We also found a gem in Bob Segar’s “Sock It To Me Santa” and even penned one of our own, a Motorhead-sounding ditty entitled, “It’s Christmastime Again”. The CD is being recorded at “A” Studios in London, Ontario. Gord Prior is producing with Aaron Murray engineering.

The release of Heavy Mental Christmas will coincide with a western Canadian tour in November. We also hope to play our hometown of London around the same time period. We will announce our tour dates as we get them.