Most people in the hard rock / heavy metal world know the last name Vollmer as the last name of Helix‘s frontman Brian Vollmer. Helix were formed back in 1974, have released over 25 albums including live and compilation records, and are best known for their 1984 hit song “Rock You”. However, the last name Vollmer may well soon become synonymous with the Canadian icon’s new reality show entitled The Vollmers with his wife Lynda. 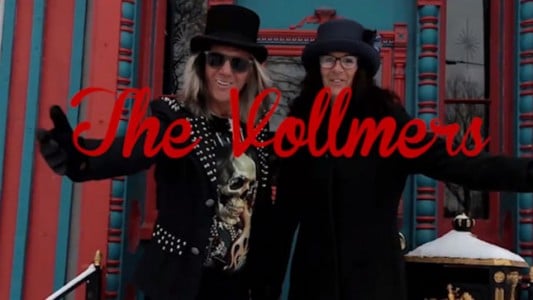 Speaking exclusively with Sleaze Roxx, Brian Vollmer stated as follows when asked what prompted him and his wife Lynda to start their own reality show: “I’ve been taking home movies since I was a kid using my grandfather’s 8MM camera. The reality show is just that — home movies — only Lynda and I lead a bizarre life where on one hand, our life is very “normal” and on the other hand, we’re travelling around the world rubbing shoulders with some of the greatest names in rock and roll. The web series allows me an avenue to advertise everything I do from teaching Bel Canto (I’m one of the last teachers in the world) to Helix to everything in between.”

In terms of what gets filmed for The Vollmers, Vollmer advised: “The process is simple — film everything we do. This really is a “reality” show!” Vollmer added that the cameras are on “whenever we think there’s something interesting to film or where we think the characters involved in the shot are doing something that would contribute to that episode’s ‘plot.'” With respect to how many episodes that people can expect from The Vollmers and when season one will end, Vollmer stated: “Dunno. There is no set number of episodes per year or even a set time to release each one. That’s the beauty of this for me. I release each episode as I finish it. Eventually I will have a website with all the episodes on it.”

THE VOLLMERS EPISODE 2: BRIAN AND LYNDA GO TO FLORIDA PART 1

BRIAN AND LYNDA GO TO FLORIDA PART 1: In this episode Brian and Lynda head to Florida for their second holiday of 2015. They stay with William Malstrom an…