An important part of Helix‘s history will no longer be owned by one of its members as the home of Helix frontman Brian Vollmer and his wife Lynda in London, Ontario, Canada has been put up for sale. At one point, the home was featured on MTV‘s television show Cribs.

The following message was posted on Vollmer‘s Facebook page yesterday: 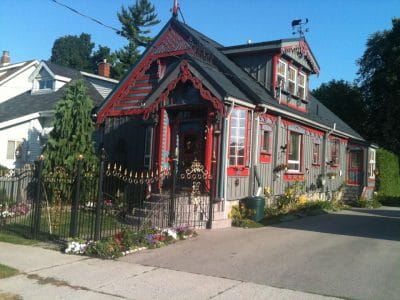 “Well, today was the big day…Today Planet Helix went on seller’s block. Lotsa memories in this house over the years-good times with good friends-but now Lynda and I are going into a “new stage” of life. The house has become too big, takes too much maintenance, considering I’m gone a lot during the summer on Helix gigs, and for 5-1/2 months every winter we’re now going to be in Florida. Some of the people who we’ve spent time with in the house or the back yard (for one of our numerous parties over the years) are gone. I especially miss Jay Wetlaufer and Brad Scrinko.

Jay worked as a parts guy for the Chevy dealership in Woodstock, and we’d been friends forever. The thing I liked best about him is that he was a great listener. Me-I never shut up, so we made a good pair. He always looked interested and made you feel like Number 1. Brad was my next door neighbor. He was the kindest, most thoughtful, gentle man I have ever known. This last summer the back yard didn’t seem the same without them there. And so it goes…

When Fritz fell off the ladder last November I realized how short and precious life is and how it can turn on a dime. One minute we were all at practice laughing, joking, and hugging each other by the door as we left to go home, and the next day Fritz was in an ambulance having a potential life threatening seizure on his way to the hospital in Hamilton.

Lynda has wanted to downsize for several years now. It’s too much for her to maintain. She’s not the type of person to allow one room of the house to be “out of order”. I kept holding on because of how much I had emotionally invested in the house and the sheer amount of work over the years to create it. But now it felt right to let go. Time to let someone else enjoy the house. Time for us to give ourselves more time with the people we love.

I’ll never retire. I’ve never really had a job in music. I tell people I have “…the world’s most expensive hobby…” ‘cos if I put this much effort into any other job I’d be a multi millionaire. But I love what I do and I’m so ever grateful I’ve been allowed to live my life doing it and actually make a living doing what I love -writing, recording, touring, the whole package. That’s why I got into it and that’s what I hopefully will do until the day I die. Just like Johnny Cash-my hero. He wrote & recorded songs on his death bed. That’s the way I wanna go.

We’ll miss the house and all the good times we had there. But it’s time to move on to new pastures. Doesn’t mean I’m not going to do everything I’ve been doing-teaching, writing, recording, touring, and rocking out. It just means I’m going to be doing aforementioned things in and from a smaller house…lol.